At a concert in October of 2001, Michael revealed that he had originally tried to pitch this album to Tooth & Nail Records, but they said “they couldn’t do it right now.” At the time he pitched the album, it was titled “Music Explosion” and the cover depicted a huge nuclear explosion. Recorded in August of 2001, the songs were all about the world exploding and buildings coming down. In September of 2001, the 9-11 attacks occurred as Michael was painting at 4am (California time). This freaked him out because he had just recorded this album about the same type of stuff happening. So he decided to change the title of the album to “Finding Angel” and change the cover artwork.

Liner notes:
This CD was recorded on a Panasonic cassette recorder from my couch at home and mastered by Andrew Prickett. All songs written and performed by Michael Knott, except “Haydn Flute” performed by Kerry A. Mack. 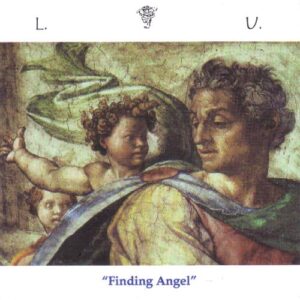 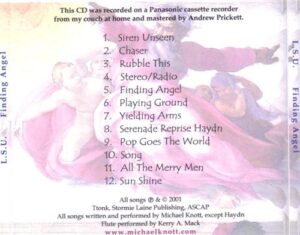