Bob Brown is Moron… or, should I say, the band called “Moron” is a one-man band by Bob Brown. All of his CDs are available through his website (moronmusic.com). Brown had this to say about the song: “Written by Michael Knott and performed by Lifesavers Underground on their 1991 album This is the Healing. Recorded by moron (with new melody and musical concept) on May 24 and into May 25; and on May 27, 2012.I had previously recorded a version of this song in September 2010 and April 2011, a version that was more or less in the ballpark with LSU’s version. I thought that first moron version was okay, but I knew that it needed something else. Then, just days before going out to Colorado to mix the record, I completely scrapped the old version and started again. Humanly speaking, this sweet and bouncy tune came out of nowhere. I was and am amazed at its elements–even the harpsichord is just the right voice as the solo riff….I am grateful to God for such a beautiful cover of a great Michael Knott song. All moron covers on prior CDs suffer from lack of creativity and my lousy singing, but this song–FINALLY–nailed it right. In fact, I liked it so much that I scrapped three other covers that I had recorded and was planning to include on this CD (“Always on My Mind”–with altered lyrics to be the words of regret of a post-abortive mother, “Bee Hoping” by Joy Electric, and “Unseen Warrior” by Michael Card) because they (my versions of them) did not hold a candle to this song and production.

I am indebted to Michael Knott for allowing me to record his brilliant song. Used by permission and under license.” 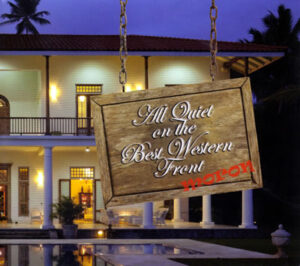 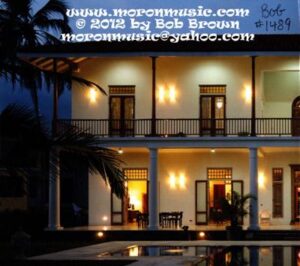 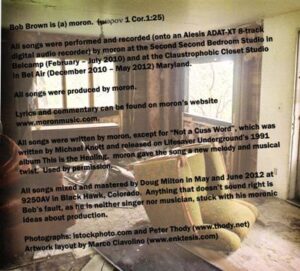