This video documents “the real story of Tooth & Nail Records.” Michael Knott is featured prominently in the beginning of the story, as detailed below. Clips from Knott’s video for the song “Tattoo” are also included. 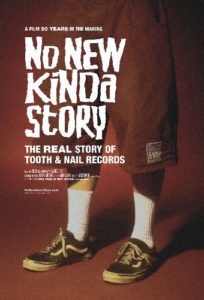 Part of the video covers when Michael Knott was involved with Tooth & Nail:

Brandon Ebel: And so I went and got the loan, and then I wanted to sign Wish For Eden and Focused. I approached a friend of mine who I had just got to know when I moved down to Southern Cal named Mike Knott.

Brandon Ebel: So I said “hey man, I need you to help me get a couple of these bands signed. Will you be the president of my record label? And He’s like: “well, what does that entail?” and I go “all you have to do is meet with the bands a couple times, take ’em out for dinner, and I’ll give you $2,000.

Rob Walker: Michael Knott started calling, and me and him started, you know, talking and he was giving me advice. And then we went out to dinner to, uh, work out the final details of the contract. And you see Brandon’s arms under the table passing, you know, money to Mike Knott to pay for the bill, but ‘Mike Knott’ – supposedly the guy from the label. It was just… It’s just like even if Brandon wasn’t part of the label, what’s he doing at the dinner?

Brandon Ebel: I just did not think that anyone would sign with me. I’m like this 23 year old kid, with a loan from his grandpa, with no real experience. So I just I didn’t know if…. Mike Knott was somebody that had a name, a reputation. So that being said, in these meetings we would have, I was always his right hand guy, even though really, I was the guy.

Brandon Ebel: Focused and Wish for Eden signed thinking they were signing to Mike Knott’s label and I was his employee. And then basically, after about, like… I’d say, two or three weeks of that, Mike Knott meets me – I’ll never forget this – at a bar. He’s like “meet me at this bar, like, at midnight.” at this dive like punk rock Social Distortion kind of bar in um, I think it was in Huntington Beach, and I’ll never forget – it was like super smoky and he was sitting there playing pool smoking his cigarette – he’s like the coolest guy of all time – and he just basically looked up and said “look – I can’t keep up with you, you call me all the time, I can’t, I’m not going to run a label, um, so I think we should just nix it.” So then I called the bands said “hey, the cats out the bag. Basically, Mike Knott doesn’t own the label, I do. If you guys don’t want to be on the label, that’s fine.” But at the point, I was already paying for their records and they were all into it, and I’m the only one they really worked with anyways, so…”