The story of the song from Jason Chu: “This gig was at a local bar in Alabama (The Central Club in Leeds, Alabama) and probably 90% of the patrons were regulars and not there to see us. They heckled a lot and it led to Michael ad-libbing this song.

The crowd was doing karaoke just before Mike’s set. As part of their heckling, they kept feeding him shots of what we think was some local moonshine but they kept referring to it as water. Then he has them put on “Who Let the Dogs Out?” and he kind of karaoke’d it during his set. It was a surreal night, to say the least! He began responding to the hecklers and was getting agitated by them (understandably), and then one of the regular patrons said: “It’s better to be pissed off than pissed on” and then Mike said “that reminds me of a song i’m about to write” which is of course equally brilliant and abstract and hilarious… as his tour manager at the time I was a bit worried about what would happen next. We turned off the cameras and I cut the set short.” 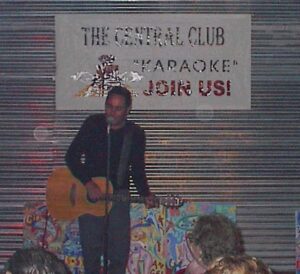