L.S.U.’s Cornerstone shows in the early 90’s are legendary. A few bootleg videos were captured, but nothing was recorded professionally (unfortunately). In 1999, M8 took the best audio they could find and made this CD (Volume 2 was part of the Wakin’ Up the Dead re-issue). The song orders were changed and edited some, but here are the best of what happened those two years.Tracks 1-12 are from Cornerstone 1993; Tracks 13-18 are from Cornerstone 1991. 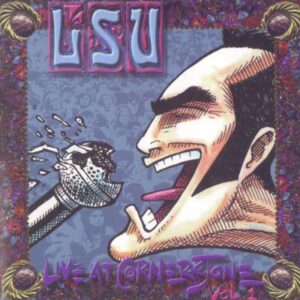 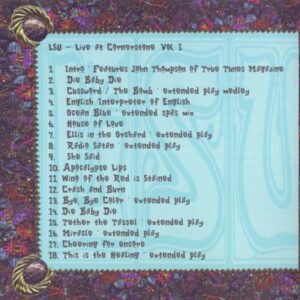 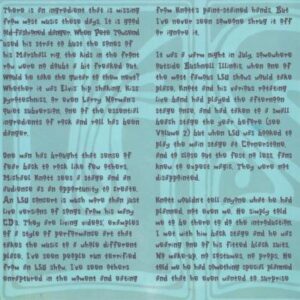 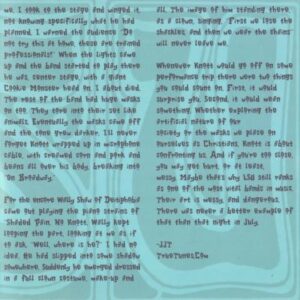 There is an ingredient that is missing from most music these days. It is good old-fashioned danger. When Pete Townsend used his strat to bust the cones of his Marshall rig, the kids in the front row were no doubt a hit freaked out. Would he take the guitar to them next? Whether it was Elvis’ hip shaking, Kiss’ pyrotechnics, Or even Larry Norman’s quiet subversion, One of the essential ingredients of rock and roll has been danger.

One man has brought that sense of fear back to rock like few others. Michael Knott sees a stage and an audience as an opportunity to create. An LSU concert is much more than just live versions of songs from his many CD’s. They are living videos: examples of a style of performance art that takes the music to a whole different place. I’ve seen people run terrified front an LSU show. I’ve seen others enraptured in the moment and eating from Knott’s paint-stained hands. But I’ve never seen someone shrug it off or ignore it.

It was a warm night in July, somewhere outside Bushnell Illinois, when one of the most famous LSU shows would take place. Knott and his various rotating live band had played the afternoon stage once, and had taken to a small beach stage the year before (see Volume 2) but when LSU was booked to play the main stage at Cornerstone, and to close out the fest no less, fans knew to expect magic. They were not disappointed.

Knott wouldn’t tell anyone what he had planned, not even me. He simply told Me to be there to do the introduction. I met with him back stage and he was wearing one of his fitted black suits. No wake-up, no costumes, no props. He told me he had something special planned and that he even wanted to surprise me. I took to the stage and winged it, not knowing specifically what he had planned. I warned the audience “Do not try this at home, these are trained professionals!” When the lights came up and the band started to play there he was, center stage, with a giant Cookie Monster head on. I about died. The rest of the band had huge masks on too. They tore into their set like animals. Eventually the masks came off and the tone grew darker. I’ll never forget Knott wrapped up in microphone cable, with creamed corn and pork and beans all over his body, breaking into “On Broadway.”

For the encore Wally Shaw Of Deitiphobia came out playing the piano strains of “Shaded Pain.” No Knott. Wally kept looping the part, looking at me as if to ask, “Well, where is he?” I had no idea. He had slipped into some shadow somewhere. Suddenly he emerged dressed in a full clown costume, make-up and all. The image of him standing there, as a clown, singing, “First we lose the shackles, and then we wear the chains” will never leave me.

Whenever Knott would go off on some performance trip there were two things you could count on. First, it would surprise you. Second, it would mean something. Whether exploring the artificial nature of our society or the masks we place on ourselves as Christians, Knott is about confronting us. And if you’re too close, you may get hurt. Or at least, messy. Maybe that’s why LSU still ranks as one of the most vital bands in music, Their art is messy, and dangerous. There was never a better example of that than that night in July.