As many reviewers pointed out, a better title for this is the “Definitive Collection From Albums That KMG Owned the Rights To.” Many albums were left out. Two new songs were included, from Michael’s Industry demo (one on CD for the first time). This album also had a good number of Gerard (Knott) paintings in the artwork. 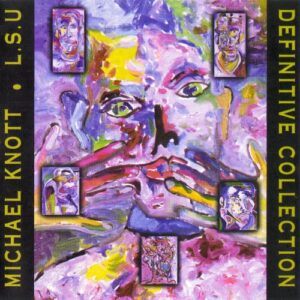 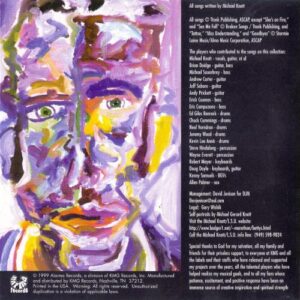 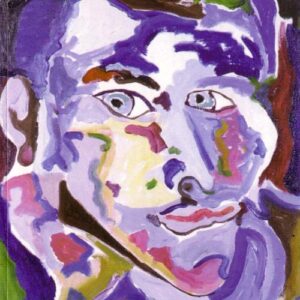 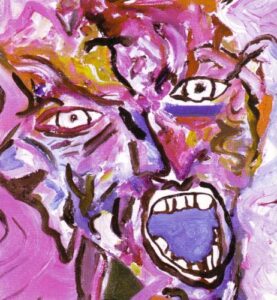 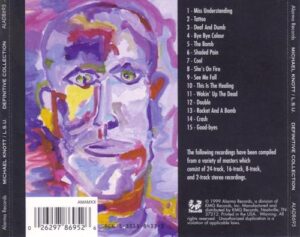 Knott’s honesty meant playing the type of music he really loved, despite its absence in the Christian market. Likewise, it meant expressing his treasured faith from the honest perspective of a real person, in a real world, where his life experiences both highs and lows. He wanted his songs to relate to the daily struggles with which every believer battles and then offer hope and understanding.

Ironically, nothing Knott did in his early days would cause scandal in today’s Christian market. As heard on the songs “She’s On Fire” and the worship-driven “See Me Fall,” the Lifesavers started out like every other Christian post-punk outfit in Southern California with happy, light songs about God. In 1987, Knott added the word “Underground’ to his band name because he decided he wanted to be honest musically, and that meant altering the band’s sound to fall in line with the most cutting edge music in the general market. That same year, Lifesavers Underground released Shaded Pain, an album often viewed as the cornerstone to all alternative Christian music that followed. Shaded Pain unsettled many Christian listeners because of its “worldly’ sound, but the lyrics caused the most controversy. Knott stepped away from the optimistic and ideal to explore areas of Christian living where a person still experiences moments of confusion, torn convictions, and self-punishment which try incessantly to erode faith.

Though eyebrows were raised by Shaded Pain, fan response and critical praise were nothing less than overwhelming. Two years later, Knott decided to start the first indie Christian alternative record label, and in 1989, L.S.U.’s Wakin’ Up the Dead became the first release on Knott’s own Blonde Vinyl Records. Wakin’ Up the Dead continued along the same lines musically as Shaded Pain, but the lyrics were even more evolved. Some of the songs continued to touch on real life struggles, including a song about co-dependency: a taboo topic in the Christian music scene of the eighties. On a more radical front, Wakin’ Up the Dead attempted to tackle the most overtly Christian topics imaginable, without all the clichés. Not only were there songs about judgment, revival, and worshiping God, the album also included retellings of various Old Testament stories from such books as Exodus and Daniel. Even the album’s title cut, “Wakin’ Up the Dead,” is nothing more than an open celebration of Christ’s triumphant return put to an edgy, guitar-crunching, goth-influenced musical landscape. With Wakin’ Up the Dead, L.S.U. proved that a band could still sound relevant when playing cutting edge alternative music containing blatant Christian lyrics. Some people embraced the controversy in regards to Knott preaching God’s Word through such a “worldly” vehicle. Little did they realize how many new alternative Christian rock bands would follow L.S.U.’s lead.

By 1991, the Christian alternative scene was in full swing, and Knott recorded and released the third L.S.U. album, This is the Healing. Amidst all of the hype, This is the Healing became the best-selling and most popular L.S.U. album to date. The band continued singing about real human experiences like war, suicide, forgiveness, and even the struggle to continue trusting Christ when desperately needed miracles don’t occur, In the title track, L.S.U. nailed the listener with catchy, cutting edge rock while delivering lines like, “You’ve tried to philosophize your pain / But the hurt’s in your heart and not in your brain / You could be hit by the Spirit and be made new.”

The following year, Blonde Vinyl took a different type of hit when nearly seventy-five thousand units of product never made their way to the retail outlets due to the bankruptcy of the label’s distributor. More product was manufactured, but problems arose immediately with the new distributor. Blonde Vinyl was doomed. Two of the biggest casualties were a new L.S.U. album entitled The Grape Prophet and Knott’s first solo album, Screaming Brittle Siren. Both were barely distributed, and though the masters were later purchased with the intent of re-releasing them, both albums still remain in record label limbo.

In 1993, Knott released a new L.S.U. album, Cash in Chaos, with a new distributor. Without Blonde Vinyl’s old networks, the album did not have the impact of earlier albums, even with L.S.U.’s ground-breaking appearance on the main stage at the 1993 Cornerstone Festival. Thousands of fans still vividly recount stories of the band appearing in costume to the roar of Shaded Pain’s “Die Baby Die,” as Knott sang the first couple of songs wearing an over-sized Cookie Monster mask.

In 1994, Knott released the first L.S.U. album on a label that was not his awn. The new album, Grace Shaker, was similar to Wakin’ Up the Dead in that Knott wanted to sing about the most blatantly Christian topics imaginable in an alternative rock format. Some songs, like “Christ Saves,” could literally be re-arranged and turned into church worship hymns. One song on the album, though, was misconstrued by many, which embodied a perfect example of how Knott has been misunderstood throughout his career. “Double,” which opens Grace Shaker, deals with a man (a Christian father by day, and a barfly by night) who wants to serve God, but beats himself up emotionally due to his repeated failures. The man is further tormented by seeing his Christian “examples” failing as miserably as he is (this song was written during the media’s heyday with Christian leadership scandals). Just look at the lyrics: “Your wife says hurry, we’re late for church / And you can barely see and your head still hurts / And the preacher starts preaching and you feel remorse / He’s got five little kids and a big divorce / And your wife looks down and says she doesn’t know how / He’s been her guiding light for ten years now / His marriage is over, it’s barely alive / How in the world will ours ever survive?” The song’s chorus continues with the man back at a bar, where Knott sings, “The stool falls over when you sit back down / It bumps a mean pool shooter from across the town / He misses his shot and it’s all on you / With your last four bucks you know what you’ll do / Sorry man, can I buy you a drink / And he shakes his head and says, make it a double.” The irony is that the man now has to tell the pool player that he only has four dollars and can’t buy him a double; an open confession of his life’s pathetic condition which falls on very unsympathetic ears. Neither the church nor the bar gives him comfort.

Some people thought the song condoned debauchery, but the idea never crossed Knott’s mind. He also never expected that anyone would take a few lines out of context on a blatantly theme-oriented album. Knott desired to get inside the mind of so many struggling, hurting, depressed, and doubting Christians, who fail repeatedly in their own faith and who get no encouragement from leaders who seem to be stumbling in even worse ways. Starting with a character experiencing a spiritual low, Grace Shaker takes the man through the various steps of faith which show him that grace, not alcohol or his Christian leaders, has the power to make a positive change in his life.

Around the same time as Grace Shaker, Knott released a solo album, entitled Rocket and a Bomb. This album marked Knott’s biggest musical departure since the Lifesavers developed into Lifesavers Underground. Rocket and a Bomb featured a mellow, acoustic-based collection of songs about different odd personalities, real life events from Knott’s own experience and reflections on his own struggle to reconcile the demise of his youthful optimism with the acceptance of life’s hard knocks within the context of his faith. The album’s title track, “Rocket and a Bomb,” summed up the latter with the chorus, “All I ever wanted was a good job, some bus fare, a rocket and a bomb.” The chorus exemplifies modern man’s desire for the ultimate, his expectation of the bare minimum and the struggle that ensues when he doesn’t get either.

As the years moved on, so did Knott’s output of new material. In 1995, Knott released a pair of solo albums, Fluid and Strip Cycle. Later, he released the worship-oriented Brow Beat album, which included the song “Deaf and Dumb” that Knott later performed live on the Trinity Broadcasting Network.

Between 1996 and 1997, Knott’s time was capitalized by one of his general market side projects, the Aunt Bettys, who landed a recording deal with Elektra Records. Aunt Bettys’ self-titled debut, which included new versions of “Double” and “Rocket and a Bomb,” received much critical praise (including a top ten records-of- the- year nod from the L.A. Times – Orange County edition), but did not live up to its commercial potential. Aunt Bettys’ follow-up record, Ford Supersonic, was released on Marathon Records in 1998. By this time, however, Knott had moved back to working on L.S.U. and solo material.

For those who wonder why Knott created the Aunt Bettys instead of trying to cross over with L.S.U., the answer is rather startling. L.S.U. is a ministry band, and Knott didn’t want to compromise the integrity of the band’s ministry. In fact, since the early days of the Lifesavers, Knott has always had a separate general market band to avoid confusion. During the early Lifesavers days, it was Idle Lovell. During the L.S.U. days, it was the Bomb Bay Babies, who actually secured a general market publishing deal with Windswept Pacific. Finally, it was the Aunt Bettys who gave Knott his first major label shot.

In 1998, Knott released the first new L.S.U. album in four years, Dogfish Jones, and a new Browbeats record subtitled Wither Wing. Knott, however, put most of his focus into writing, recording, and performing new solo material. This present retrospective collection of Knott’s work features two of these new songs – “Miss Understanding” and “Good-byes.” These songs show the most commercial and accessible side Knott has ever shown, yet they retain Knott’s flair for powerful poetic metaphors and heart-torn personal convictions.

Why was Michael Knott ever considered controversial? Because he was different, cutting edge, and honest. How was he controversial? By doing what is widely accepted in other Christian alternative bands today. What is the difference between those bands and what Knott did with L.S.U.? Knott did it first. He was the ground-breaker. And so he endured all the resistance, which comes with change.

David Jenison has worked with Michael Knott throughout the nineties. He is a former editor at both Grammy Magazine and Hypno Magazine (where he was Editor-in-Chief). He is currently a freelance writer in Los Angeles.