“I laid this down today with friend Rick McDonough. It’s in its infancy with scratch vocals, but feel free to download if you like it. It’s called Rack of Lamb – ode to a friend. Thank you for your support!”

For those that haven’t heard on Facebook yet, there is some good news about Michael Knott music:

All this and more pops up as discussions in the Knottheads Facebook Group – of course, nothing is official until actual links to stuff for sale shows up, but if you want the inside scoop… you should join that group. You can even read the details of how the admin of this web site create the art layout for the Wakin’ Up the Dead vinyl. Its an instant cure for insomnia, for sure.

A little late on this, but Live at the Viper Room Volume 2 was recently released. Featuring the song “You’re Where I Wanna Be” that is only available on this live recording. This show was a few months before Live at the Viper Room Volume 1, and features the same amazing band line up: Michael Knott (lead vocals, electric guitar), Andy Prickett (lead guitar, background vocals), Eric Campuzano (bass), Robert Meyer (Fender Rhodes, keyboard, organ, background vocals), and Ed “Giles” Benrock (drums, background vocals). Pick it up on the Blonde Vinyl BandCamp page today.

A surprise single release from Michael Knott (after some prompting by Joshua Lory). This is a song that Knott recorded years ago, but is now being released for you to stream or purchase individually. Check out the trippy cool layered vocals on this track!

For those that missed the Kickstarter for CDs or Vinyl of Songs From the Feather River Highway, but waiting to buy one… the wait is over! Go to the Young Earth Records Bandcamp page to purchse limited edition CDs, Vinyl or Combo packs now. Be sure to grab this awesome EP while there are still copies left!

Just released from the vaults by Blonde Vinyl: Michael Knott – Live At The Viper Room 3/4/1998. From the old Knott page news section: “Mike’s second “official” post-Aunt Bettys solo project show was held on March 4, ’98 at the Viper Room in Hollywood. The show attracted a large crowd, including many of the industry reps invited from labels such as Atlantic, Interscope, and significant smaller labels.

Jerry Harrison of Talking Heads, Tom Morello of Rage Against the Machine, and the bass player of Live were also seen in attendance. They were there to see bands following Knott, but they heard Knott nonetheless.” 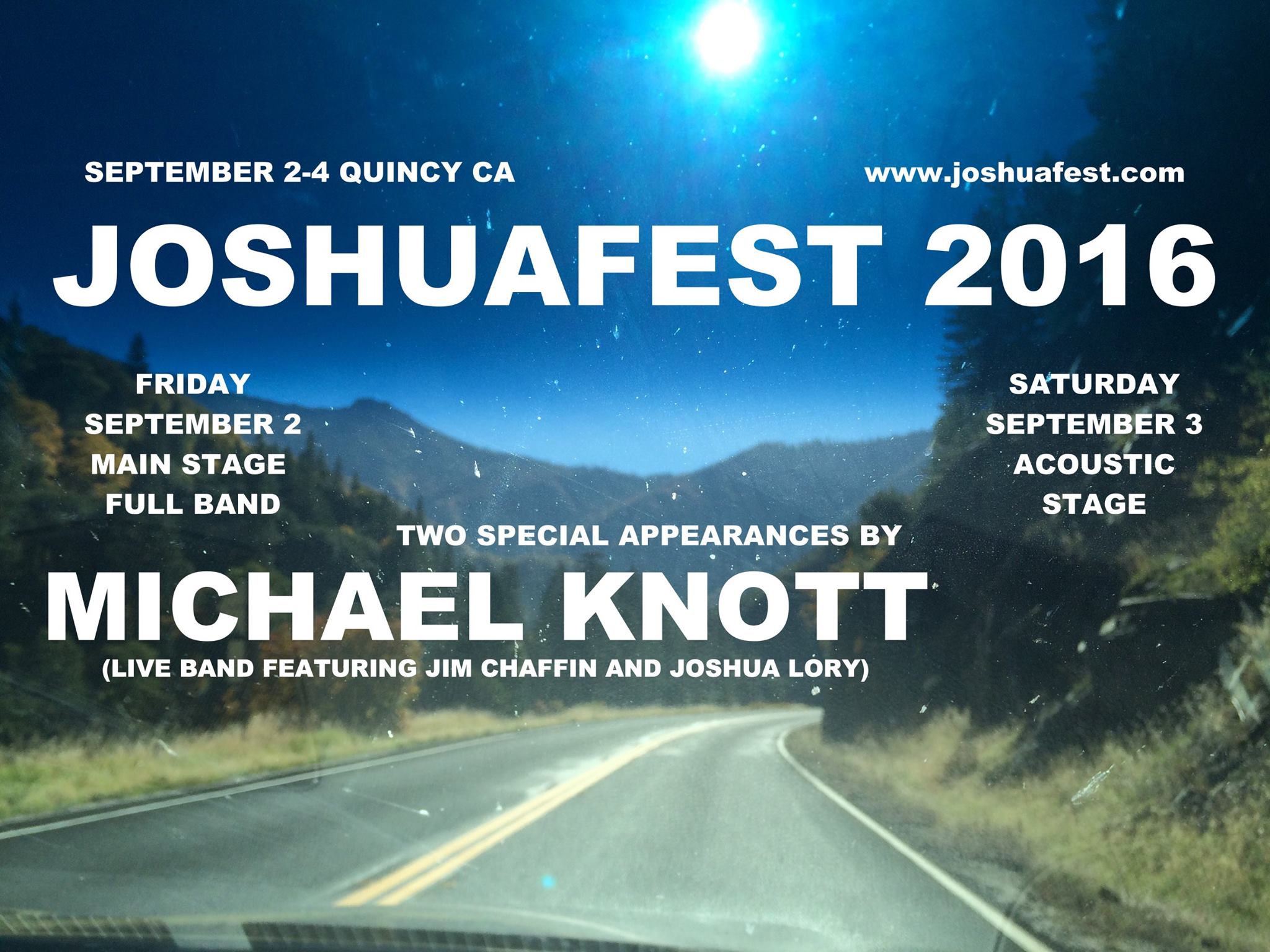 If you are planning on being at Joshua Fest next month, be sure to catch Michael Knott and band (Joshua Lory on bass and Jim Chaffin on drums) on the main stage on September 2nd and the acoustic stage September 3rd. Or if you are on the fence about going, maybe this will push you over the edge 🙂

Now available on the Blonde Vinyl BandCamp page are Rocket and a Bomb Live! and Live In Florida 12/30/1994 (Bootleg Series Volume 2). Rocket and a Bomb Live! is the live album from the recent Kickstarter Campaign, and soon to be released DVD. The Bootleg Series Volume 2 is a live audio from way back in 1994 that you don’t want to miss! Check them both out to hear Knott live at his best.

The long-awaiting new EP from Michael Knott and company, Songs From the Feather River Highway, is now available for anyone to purchase digital copies. See the Young Earth Records Bandcamp page to stream and purchase. CDs and 7-inch vinyl are also coming soon.

If you supported the last Michael Knott Kickstarter project, check your email or log into your KS account. Josh has sent out the link to download the new Songs From The Feather River Highway EP. Its is awesome classic Knott. The track listing is:

Artwork is still being worked on, and then it is off to manufacture the CDs and vinyl. Once the artwork is ready, it will be available to non-KS supporters.

Who Is Michael Knott?

Michael Knott. The man, the myth, the one that got away. You should have been a fan of his from day one way back in 1981, but you missed the opportunity. And now he has about 10,000 albums out, and you can't even begin to try and buy them all. But his work is so good that you feel compelled to try. Art this good should be all over the radio airwaves, blaring from every car stereo, and being remade into cheesy elevator music compilations.

Michael Knott's "music" is impossible to classify, unless you want to use the generic "alternative" label. That's about as far as you can go. You can usually classify one or two styles that influence each album, if you are lucky. Some albums have a heaviness to them, others are purely Mike and his acoustic guitar. From gothic to power pop to industrial to Americana, Michael Knott has covered them all.

And that's just where the story starts. From painter to producer, from starting a record company to pouring baked beans all over himself in concert, Michael has stretched himself in every creative way possible. This site is just an attempt to catalog all of these creative outlets. Let the insanity begin.

Michael Knott's official bio
(on the official site)
Knott Heads on H?
(about this site)
Copyright Notice
(any copyright questions)